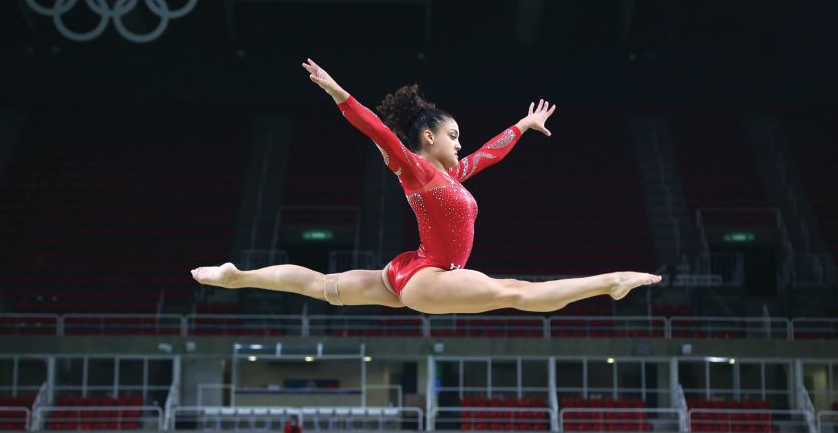 Breaking the glass ceiling for women and minorities

Early 85 years after female gymnasts were excluded from competing in the 1932 Olympics, several women’s teams have become more popular and even more decorated than the men’s at the 2016 Summer Olympics in Rio. During the internationally watched event, U.S. women athletes went home with 27 gold wins compared to the U.S. men’s 18, the New York Times reported.

Even more historically significant was the winning of team gold by the “Final Five,” one of the most diverse U.S. Women’s Olympic Gymnastics team ever to compete. These young artistic gymnasts accurately reflected a new generation of the melting pot that is America.

The group’s first released photo was especially telling. In the center of the black and white image were Simone Biles and Gabby Douglas, two African-Americans, standing side-by-side with teammates Laurie Hernandez, a Latina; Aly Raisman, who is Jewish; and Madison Kocian, who is Catholic.

Prior to the Final Five, there were a few other minority women pioneers. Female athletes, such as Luci Collins, Dominique Dawes, Betty Okino, Amy Chow and Wendy Hilliard, contributed to the changing faces of women’s gymnastics when they represented Team USA.

In 1936, female gymnasts competed in the Olympics for the first time, according to The Gymternet. But only white women competed until Luci Collins became the first African American gymnast to make the Olympic team in 1980, according to NYMAG.com. From then on, a person of color would intermittently make the team.

“Sports are still very much a reflection of socio-economics. As you see a rise in the African American middle or upper class, you’re going to see more African American kids in tennis, golf, who might swim or engage in gymnastics,” said Rob Ruck, history professor, Ph.D., University of Pittsburgh. “You’re not going to see that in poorer communities unless there’s a targeted effort to develop that sport to that demographic.”

This is exactly what Wendy Hilliard did when she started the Wendy Hilliard Gymnastics Foundation 20 years ago. Now a coach and founder of the organization, which provides free to low-cost gymnastics to minority youth in Harlem, N.Y., she was the first African American to represent rhythmic gymnastics internationally in 1978.

“Everyone was very proud. It was a combination of me being the first black in rhythmic gymnastics to it being a very new event. [Rhythmic gymnastics] had already been slotted to be in the Olympics in 1984. So there was much excitement,” Hilliard stated.

Hilliard has partnered with several organizations in Harlem to provide scholarships, infrastructure and equipment for underserved young gymnasts.

“We make it possible for those who don’t have a lot of money to participate in the sport, and we support them all the way. We’re heavily African American and Hispanic, with a mix of folks who [represent] society. It’s different than mainstream gymnastics, which is primarily white and high-economic participants,” she explained. “The kids in the program see kids who look like them and are from the same community. You remove the element where you’re the only one there.”

She also offers them the benefits of her experience.

“I competed in the Olympic trials. I have coached an Olympian. I know the process to have a top athlete,” she said. “The reality is there are so many variables that happen during that time, such as injuries. What we can do is take our kids to a high level, and we have done that. If our kids have the work ethic, we do what we can to make sure they get to that level.

The step-by-step rise in minority gymnasts stems from the athletic abilities and work-hard attitudes of the gymnasts themselves, and the unwavering emotional and financial support of parents and coaches in the face of challenges due to the intersectionality of class, race and gender as well as injuries.

Natalie Hawkins, mother of three-time Olympic medalist Gabby Douglas, filed for bankruptcy in part because of the cost of financing her daughter’s career, according to U.S. News & World Report. Barely old enough to remember, Douglas stated to the religious publication Christianity Today that her family was also homeless at one point, and her mother often worked several jobs to ensure Douglas fully realized her Olympic dreams.

Simone Biles’ birth mother struggled with drug addiction, so she was raised by her maternal grandparents who she calls “mom and dad.” They demonstrated their support of her dreams in numerous ways, including using their retirement savings to build World Champions Centre, the Texas-based gym in which Biles regularly trains at least 32 hours a week, according to the Chicago Tribune.

Gymnastics has always been a priority for 16-year-old Laurie Hernandez, who has been homeschooled since she was 9 years old, reported NBC. Hernandez, like Biles, matured as an athlete within the gymnastics club system, stated Hilliard.

“Gabby has the closest story to my [business] model, but her mother had incredible resources. Single mom, four kids . It was a challenge. [Gabby Douglas] still grew up in the gymnastics club system. Gymnastics clubs, where most gymnasts come from, are supported by parents’ fees. They pay for the business basically. Laurie and Simone came from that model,” she explained.

Prior to the 2016 Olympics, Hernandez suffered several injuries. Learning from her past experiences, she told The Guardian her goal is to be a role model for Hispanics by showing them the importance of never giving up.

Men also overcame obstacles on the path to sports stardom. John Orozco comes from a working-class Puerto Rican family. His father worked as a sanitation worker, and before his mother passed away in 2015, she was a homemaker. The pair gave up every comfort to drive their son to the gym or competitions. They often slept in their car because they couldn’t afford a hotel. Orozco also benefited from free gymnastics training as a child, stated a 2012 CNN article.

Some minority gymnasts have grappled with the public’s expectation for them to fit certain molds.

Often emphasized in gymnastics is the “Russian look,” which – according to Rolling Stone . Is coded language for athletes who are “white, blonde, young and aspirational.”

During the 2012 and 2016 Summer Olympics, social media users attacked Douglas’ looks – more specifically her ethnic hair. Douglas has also spoken at large about the racially charged bullying she endured as a young gymnast training in Virginia.

Even men aren’t exempt. Cuban-American gymnast Danell Leyva, a self-described feminist, was told he had the wrong body type for gymnastics, according to Huffington Post. With his coach and step-dad Yin Alvarez literally jumping in excitement, Leyva took home two silver medals on the men’s horizontal bar and parallel bars in Brazil.

Biles has also been the subject of controversial statements. After she bested Italian gymnast Carlotta Ferlito at the 2013 World Championships, Ferlito publicly stated in a video, “[N]ext time we should also paint our skin black so we could win too,” according to Rolling Stone.

“There is no basis to those arguments. There just isn’t. People have these racial ‘other’ perceptions of people that are often a great variance with reality,” commented Dr. Ruck. “Great athletes are outliers. They are outliers physically, but also psychologically and intellectually. They emerge in many sports when they are beneficiaries of training, coaching and competition.” Without the prevalence of social media during the early years of her athletic career, Hilliard had a different experience from Douglas and Biles, but recalls her own struggles surrounding her looks.

Social media magnifies things, so I didn’t have that issue. It was harder for me in the U. S. [than overseas]. Black artists — going back to Josephine Baker — our uniqueness as professionals and athletes wasn’t as appreciated in the U.S. because racism was so ingrained. [African Americans] would go to Paris to pursue their sport or their art.

When I was taking gymnastics, Eastern Europeans were the best. A lot of cultures were from there and had immigrated to the United States. [Americans] were trying to copy [Eastern Europeans] to try to get better – – trying to look more European. I didn’t fit into the mold at all. My uniqueness was appreciated when I went to competitions in Europe. I tended to do better in international competitions, and I won more awards.

In the Summer Olympics, synchronized swimming and rhythmic gymnastics, which is often seen as a niche sport in comparison to artistic gymnastics, are the only two sports in which there aren’t any men’s teams, according to the New York Times.

No longer banned from the sport, minority female athletes like Simone Biles, who was asked for countless selfies during the Rio closing ceremony, are now more often associated with gymnastics than men.

In a sport where diversity has gone from nonexistent to slightly improved, minority gymnasts stepped up to the gold podium in Brazil this year to claim countless medals and to earn her title as the female face of sports.