The first African American to lead the Board of Directors of the Metropolitan Water District of Southern California.

Gloria D. Gray didn’t intend to work in the water industry. Instead, she earned a degree in business administration and then had a prestigious career as a health care administrator for the Los Angeles County Department of Health Services.

But in 2006, she was elected to the West Basin Municipal Water District Board of Directors, launching her journey to help Southern California communities find solutions to their water issues. She was the first African American woman elected to the board in its 65-year history and went on to become board president in 2010.

Today, she is the Chairwoman of the Board of Directors of the Metropolitan Water District of Southern California, of which West Basin is a member agency. She is the first African American to lead Metropolitan’s board and the second woman in this position in the district’s 90 years of existence.

“It’s an honor to be chair of a world-renowned organization,” Gray says. “My role is rewarding but also challenging. It’s a huge responsibility.” She spends her days advancing the policies of the board, meeting with different community organizations and raising awareness about the water challenges faced by Southern California. She is also supporting an effort at Metropolitan to address social injustices being discussed on a national level, including the creation of a Diversity, Equity and Inclusion Council, composed of employees seeking to improve the culture at Metropolitan.

That’s where Gray comes in. At the Metropolitan Water District, a state-established cooperative, Gray and her colleagues help provide clean and safe water for nearly 19 million people living in six counties in Southern California. She is one of 38 board members who represent each of the District’s 26 member agencies 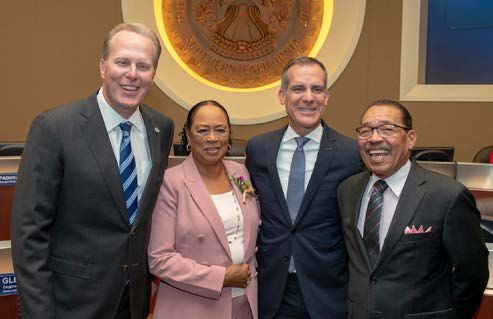 On her local board—West Basin Municipal Water District—Gray serves as the current president of the board and represents District II, which includes the neighborhoods of South Ladera Heights, Lennox, Athens, Howard, Ross-Sexton and Inglewood, home to a diverse population of people from different cultures and economic levels. West Basin has a very successful recycled water program developed over the last 25 years. Recently the program reached a milestone of producing 225 billion gallons of recycled water during that period. As an Inglewood resident, Gray also served her community in her past role as president of the Inglewood Unified School District Board of Education and as a member of the Community Task Force.

As the first African American and only the second woman to serve on the Board of Directors, Gray is thrilled and honored to hold her position. “Metropolitan is over 90 years old and this industry is basically seen as a closed industry and mostly representative of older white men,” she says. “My chairmanship represents diversity. Diversity, inclusion and equity are important in all sectors as well as in the water industry. It brings about a better product and system when you have diversity of thought and perspective.”

Before Gray arrived at her current position, she was appointed to the Delta Stewardship Council by Former Assembly Speaker Karen Bass in 2010. She was the first African American and first woman to serve on the council. Gray’s impressive resume led to an interview with the White House Obama Administration in 2013, when she was considered for a cabinet position in the Department of the Interior.

“My interview process was exciting, rewarding and educational,” says Gray. “It was an honor to be considered by President Obama’s administration, and that they would look at me as one of the people they would like to consider serving and being part of the cabinet.”

One of the issues that is important to Gray, and the entire Metropolitan board, is to address challenges to Southern California’s water reliability. This includes investing in local water supplies such as recycled water. Metropolitan’s Regional Recycled Water Program is currently in a pilot phase to evaluate the feasibility of a full-scale recycled water facility that would be among the largest in the world. If approved, it would have the capacity to produce 150 million gallons of water daily, enough for up to 600,000 households.

“We have to face head-on the impacts of climate change to our water supply reliability now and into the future,” says Gray. “This is a major undertaking, but one that is critical.” Though Gray didn’t set out to work in water, she now sees how crucial it is for every citizen to get involved in water issues. And she believes it’s her job to promote water’s significance.

“People need to be engaged in policymaking,” she says. “At Metropolitan, we also focus on education and outreach. We have to get the message out to the communities we serve and ensure a broader representation in the water industry. People need to know how important it is to engage in water. I’m very proud that we can do that.”