Walking the Walk with NGLCC

The National Gay and Lesbian Chamber of Commerce (NGLCC) was started in November 2002 by co-founders Justin Nelson and Chance Mitchell. With 11 companies coming on board as founding corporate partners, they were off and running. Nelson serves as president and Mitchell is CEO of the organization. Like most successful entrepreneurs, they have surrounded themselves with a talented team who all have an incredible sense of business acumen.

In 2019, the organization will celebrate its 17th year. NGLCC has over 1,200 certified member businesses and more than 200 corporate partners. Impressive, yet less than the National Minority Supplier Development Council’s (NMSDC) corporate membership of over 400 companies and the Women’s Business Enterprise National Council’s (WBENC) more than 300. So, why isn’t everyone signing up? We wanted to learn more about NGLCC.

RICH JEANNERET SHARES HIS STORY OF HIS SON COMING OUT.»

The 2018 NGLCC International Business & Leadership Conference, held in Philadelphia this past August, was its highest attended event; more than 2,000 attendees, from 15 nations were present.

In the U.S., they represent $1.7 trillion in spending power. “If the LGBTQ businesses were our own country, we would be the tenth wealthiest country in the world,” says Jonathan Lovitz, senior vice president at NGLCC. That equates to 33,000 jobs created, by the way. 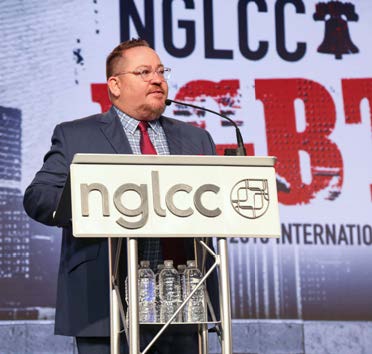 And they pay attention to whomever pays attention to them. Over 70 percent of LGBTQ purchasing decisions are predicated on how they perceive a company treats their community.

“Our third annual NGLCC Global LGBTI (LGBT International) Business Week in November 2018 was our largest yet,” says Nelson. He continues, “It has reinforced NGLCC Global’s leadership in the business community—something you can expect to be on display at the 2019 Conference and beyond.”

The power of the organization was not lost on our Canadian neighbors. “There’s all this untapped potential [at the conference],” says Carr. “We want to add to creating economic opportunities and wealth in a way that benefits all of our citizens in Canada as well as the countries that we work with,” he says.

The organization is based in Washington, D.C. and leverages its location to advocate for policies that are inclusive. Last year, they won LGBTBE (LGBT Business Enterprise) inclusion in Jersey City and Hoboken, New Jersey for contracting and development opportunities.

When the Trump administration began efforts to erase transgender people from legal protections, NGLCC went on the offensive and helped rally 56 major companies to respond to Washington. Washington has taken notice. One of the speakers at the November LGBTI Business Week was Speaker of the U.S. House of Representatives Nancy Pelosi (D-CA).

The policies resonate at the corporate level as well. Rich Jeanneret, Americas vice chair and Northeast region managing partner at EY, shared a powerful story about his son coming out. Jeanneret’s combination of protection and pride for his son as they looked at colleges brought home the challenges and risks that still exists. I asked Jeanneret about speaking up in the face of EY clients. “EY hires a lot of people not much older than my son,” Rich shares. “They don’t just expect EY to have best-in-class policies on diversity and inclusion, they demand it. It’s required to hire the best talent.”

The first thing you notice when you enter an NGLCC event is how welcoming everyone is. Like most organizations, the first few times you attend, it feels like you are at a family reunion for someone else’s family. However, that feeling is short-lived because you are never on the outside looking in for long. Sit down at a table or walk up to a group and you will quickly find yourself in the middle of the conversation.

Nelson and NGLCC have long been an advocate for supplier diversity organizations to work together. Combined, the groups represent nearly $10 trillion in economic power. That is some serious leverage.

They Walk the Walk

With a business strategy and laser focus that would put any Fortune 50 company to shame, Nelson, Mitchell and the team have put together effective advocacy that is friendly but firm, collaborative but not naïve and always respectful. If your company hasn’t joined with NGLCC, what’s keeping you?

GET MORE INFORMATION ON THE 2019 CONFERENCE THAT TAKES PLACE ON AUGUST 13-16.