Music legend Quincy Jones once referred to him as, “A remarkable talent that comes by very rarely, creating original and unique music straight from his soul.” Today, Lee England Jr., the gifted and multitalented violinist, vocalist, arranger and composer, continues to transcend boundaries with his music while simultaneously taking a stand for justice and solidarity.

Classically trained England, based in Brooklyn, New York, captivated a worldwide audience with his integration of R&B, hip-hop and soul on his violin. Also known as The Soul Violinist, during every performance, he pours his soul into his music, leaving audiences feeling as if they may have stepped into another dimension.

England’s catalog of accolades is lengthy. A few exciting career highlights include landing a spot on American rapper Sean “Diddy” Combs’ show “Making His Band”, sharing the stage with musical greats such as Stevie Wonder, Babyface and Alicia Keys, an endorsement deal with basketball player Michael Jordan’s shoe brand and being signed to Jones’ management company. The list goes on.

With countless accomplishments spanning his career, England has always had an affinity for connecting with the crowd. His street performances were the arena that allowed him to connect most organically. During a time in his career when England did not fully comprehend the power of this artform, he began questioning his success and status, comparing it to where he thought he should be professionally. It wasn’t until a friend reminded him that wherever he was performing was the greatest stage he could be on, that he began to own it.

“Street performing is such an integral part of who I am and who I’ve become,” says England. He was being refined for something greater. Believing in the collective power of uplifting others through positive change, England was presented with an unexpected experience that would allow him to actively use his instrument and his voice.

In June, England heard about the violin vigil for Elijah McClain, an unarmed 23-year-old African American male who was killed after an encounter with the police in Aurora, Colorado. McClain was also a violinist. For England, this was a no-brainer. He was there. After speaking with the vigil’s organizer, England agreed to take the lead.

“I’m groomed for this, I’m built for this. Yes, I can definitely do this,” he said. Friend and fellow violinist Ashanti Floyd made plans to attend the vigil alongside England. With press beginning to reach out for interviews, England knew they were turning the vigil into a movement. He describes the evening as a “very pure moment” filled with “love and solidarity.” Although police tear-gassed areas surrounding the performance, England and Floyd remained safe in what he calls a bubble. It was as if the police could not project the negative energy into a space that was providing so much peace. 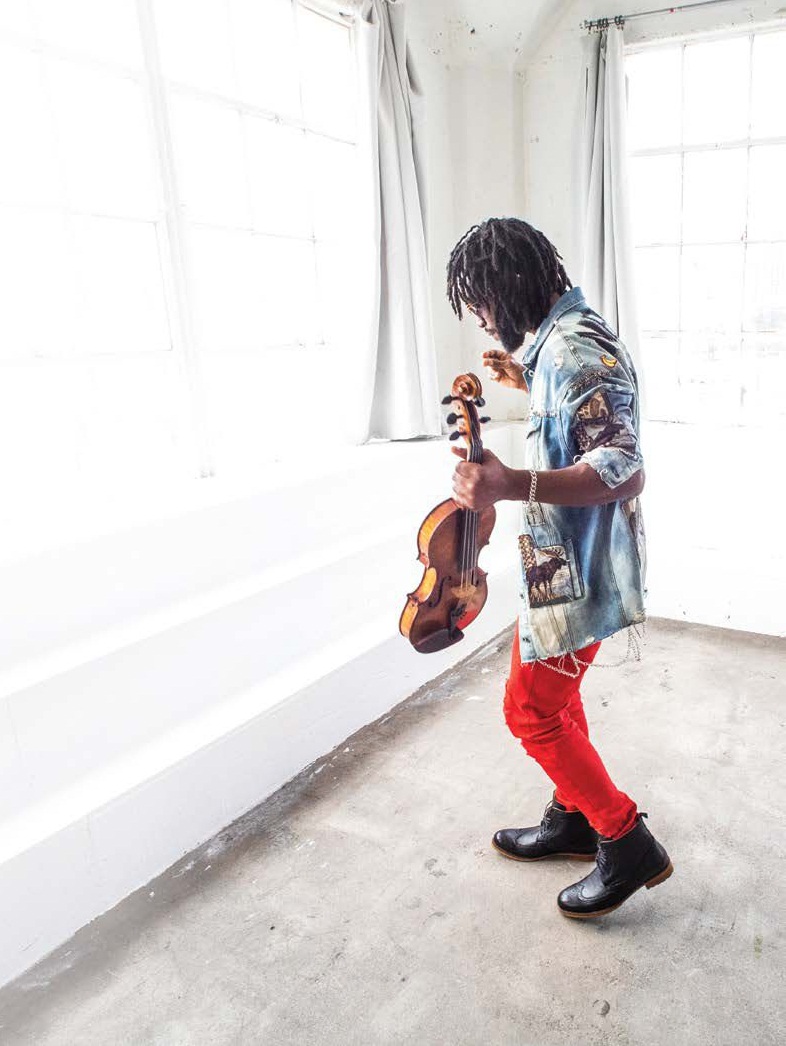 “The goal was to provide a space for people to have a cathartic moment, to see they’re not alone, to realize the only thing you can do is get up and go do it. It’s not sitting at home,” says England. He acknowledged that if the people of Aurora had not protested, McClain’s name may have been swept under the rug. The vigil was followed by interviews from several media outlets including the New York Times and Boston Globe. Mission accomplished. A new movement for justice and solidarity for McClain had begun.

Activism is nothing new to England. In a video he produced almost three years ago titled “Are We the People?”, he ignites a conversation about the institutions that divide us. Most recently, he has developed a movement he calls Teach Peace. The four guiding principles include: Voter Registration, Know Your Rights, Financial Literacy and Keeping the Pressure On (things that aren’t being shared by the media). While England says he doesn’t have the answers, he remains steadfast in his determination to be part of the conversation.

“If we actually start to get those tenets in our minds and understand how the world works from those perspectives, intellectually we can be in a space to create solutions.”