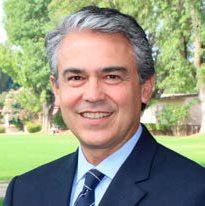 It was the 1950s. The United States economy, fueled by consumerism and manufacturing, was booming, with demand for skilled workers outstripping supply.

Seeking to help fill local demand, the Archdiocese of Los Angeles invited the Salesian religious order to establish an all-boys technical high school combining vocational training, college-preparatory curriculum and religious education. When Don Bosco Technical Institute opened its doors in 1955, it set a new standard for trade and technical education in the country.

Located in the Los Angeles suburb of Rosemead, Bosco Tech is the only U.S. high school of its kind offering a technology engineering-heavy, STEM-based curriculum centered on:

The school has incorporated cutting-edge technology, like robotics, into its CSEE and IDEA programs. That move has also yielded social benefits. For example, during the COVID-19 outbreak in March, IDEA students used robotically controlled machines to produce 1,500 commercial-grade face shields that were donated to healthcare workers at more than 60 Los Angeles-area medical facilities.

The caliber of Bosco Tech’s curriculum hasn’t gone unnoticed. Niche.com, which rates K-12 schools and colleges, ranked Bosco Tech 13th among California’s all-boys schools. It’s an achievement that hasn’t come easily. A shift away from skills training in the 1980s, followed by changes in U.S. and global manufacturing and the computerization of nearly every industry, have pressed the school to continually reengineer the way it approaches STEM education.

“By combining a college-prep education with an advanced technical education, we can show students a wealth of real-world applications. It transforms them from thinkers into problem-solvers,” says Guillermo “Memo” Gutierrez, who’s served as school president since 2019. “However, a standard college preparatory education is an exercise in patience and trust because students must believe—sometimes against their own judgement—that their lessons will be useful at some point years into the future.”

The “usefulness” of those lessons is strikingly evident. All of its graduates are routinely accepted into four-year colleges or universities, with 75% of those graduates pursuing STEM degrees. Those institutions include Embry-Riddle Aeronautical University; technology-heavy Cal Poly San Luis Obispo, Cal Poly Pomona, Georgia Tech and Virginia Tech; and Penn State, University of California and University of Southern California.

Gutierrez, a Bosco Tech alumnus and former faculty member and principal, stressed that the school’s mission is to produce leaders—not tradesmen—who are college-prepared and technically proficient. By that measure, the school’s also been successful. Graduates are employed by some of the country’s leading organizations, including the American Red Cross, Boeing, Northrop Grumman, Norton, Symantec, and NASA’s Jet Propulsion Laboratory which employs the largest number of Bosco Tech alumni, including JPL’s deputy director for Mars exploration.

Ensuring Bosco Tech’s continued relevance is perhaps the biggest challenge for Gutierrez, who oversees governance, development and fundraising, and alumni, community and industry affairs. “We know what the Bosco Tech of the 1950s looked like. But what will it need to look like in 2030?” 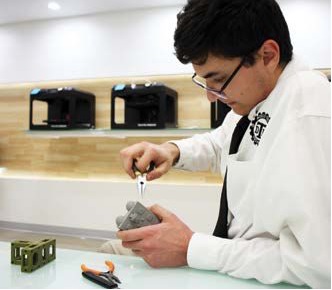 The answer will come from a strategic planning process, beginning this fall, that will involve faculty, alumni and other stakeholders. As Gutierrez describes, “It will be a grand opportunity to set a new vision for Bosco Tech. Everything will be on the table.”

■ With more women entering the STEM fields, is it time to admit girls into Bosco Tech?

■ How can the school further diversify a student body that’s heavily Latino and Asian/Pacific Islander?

■ Which technologies need to be expanded, added or discontinued? Half of the school’s nearly $2.5 million fundraising goal is targeted for new labs for BMET, which is its newest program and the first in the life sciences.

■ Should Bosco Tech resurrect the associate of science degree program it ended in 2006? Or offer certification programs?

■ What will growing enrollment mean for tuition assistance? Despite an annual tuition of a comparatively affordable $12,600, 75% of all Bosco Tech families receive financial aid from the school and up to 30% are at or below the poverty level. 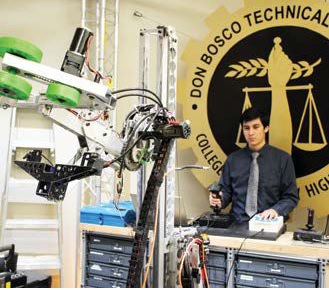 In the late 1870s, St. John Bosco, who founded the Salesian order, worked to improve the lives of boys in his hometown of Turin, Italy, and around the world. When asked whether that mission made sense today, Gutierrez responded with Don Bosco’s own words: “The school was not the end; it was rather the instrumental means for improving the way of life.” 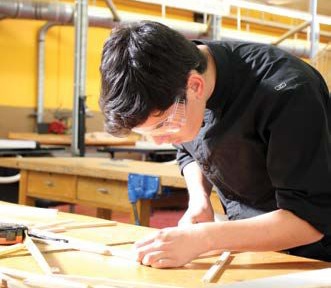 MSET SOPHOMORE ALEJANDRO CABRERA WORKS ON A STRUCTURAL SCALE MODEL AS PART OF HIS ARCHITECTURAL AND CONSTRUCTION ENGINEERING STUDIES.»