When Lawrence Wooten, senior manager, National Supplier Diversity, American Water Company began having conversations about a Diversity Summit, he had two clear goals in mind. First, it had to demonstrate that American Water was open for business for supplier diversity. Second, it had to make business sense for all parties to attend. On May 8th, at their recently completed Camden, New Jersey headquarters, both goals were met with American Water’s first Supplier Diversity Summit.

American Water is the largest and most geographically diverse, publicly traded water and wastewater service provider in the United States. The company provides services to approximately 14 million people across 46 states. It manages more than 370 individual water systems across the country, treating and delivering more than one billion gallons of water each day.

American Water has a robust supplier diversity plan and structure. There is a five-year plan with goals for each state. While Tier 2 spend is included in the overall performance of a supplier, concentration is focused on the efforts of Tier 1, which is what American Water can control.

Each state is tracked and measured on their performance. Each category manager reviews opportunity down to the category level in relation to opportunity and performance. States are encouraged to name their own supplier diversity resource.

Like any successful event, preparation is key. Most of us have been to an event where a company takes a list of suppliers and a list of team members, throws them together and hopes someone finds their soulmate. This event was about as far from that scenario as you can imagine.

“We decided early on to make the event invitation only,” says Sharon Manker, supplier diversity coordinator, National Supplier Diversity. “We wanted to be mindful of the resources required to bring people together and ensure there was a better than average chance of business occurring.”

With that in mind, the American Water team sought input from several key contingencies including their supplier diversity colleagues based in different states, as well as supply chain, security and engineering groups. Armed with input from all parties, Wooten, Manker and Robin Robinson-Still, buyer, American Water went to work. “Once word got out, it just kept growing” says Manker. Attendance came in at just under 250, an impressive size group for a first-time event.

It is just as important for potential suppliers to learn about American Water as it is for suppliers to introduce their company. The focus of an individual event is key. Josh King, chief procurement officer explained, “The national events have impressive attendance and a wide variety of service providers. A focused event allows us to bring in suppliers with specific skill sets to solve problems where we currently have limited solutions. As an example, we have met many suppliers who have drones. At this event, we connected with one that has underwater drones that can travel to the bottom of lakes to take sediment samples. That is a new solution for us versus hiring divers. The additional time available in an event like this offers that type of connection.” 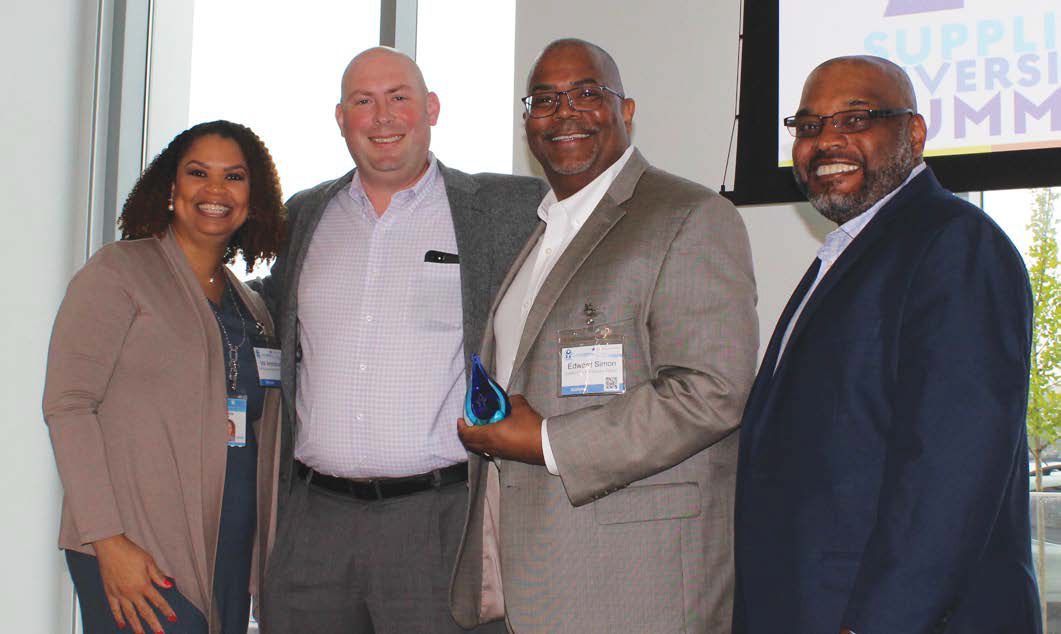 From the outset, the event had a polished and committed feel to it. Linda Sullivan, executive vice president and chief financial officer, American Water, welcomed attendees to the event and talked about the amount of infrastructure work American Water was doing and how that translated into a lot of procurement opportunities. At the close of her introduction, she asked Wooten if there was time for her to take some questions from the audience. Nice!

King also welcomed the group and spoke about his dad, a Vietnam veteran who had his own business and used a government contract to help his business grow and prosper. He saw first-hand the difference a supplier diversity initiative could make. King was also present for the entire day̶so much for gaining buy-in from the supply chain.

There were two keynote speakers. Todd Cohen, owner, Sales Leader, LLC, gave the breakfast keynote on “The Power of Presence: Succeed Before You Say a Word.” Corey Smith, senior director, Diversity and Inclusion, Major League Baseball, gave the lunch keynote on “Unconscious Bias.” Both presentations were fresh, energetic and on point.

There was a supplier diversity showcase where 16 diverse-owned companies gave a brief overview of their company. This was followed by stakeholder roundtables by topic and one-on-one matchmaking meetings. But don’t take my word for it, here are a few comments by those in attendance:

True to form, the American Water team practiced what they preached. The EMSDC lent a hand with staff for the event, the awards were provided by WBE Eitzen Creative. And the lunch, which left everyone feeling fueled not just filled, was provided by MBE Sodexo Magic (think salmon, chicken, grilled asparagus and quinoa instead of sandwiches and chips).

Do you think you would be a good match to do business with American Water? If so, head here for an introduction: https://amwater.com/corp/partners-suppliers/suppliers/diversity.