National Black MBA Association pays tribute to its past with an eye on the future.

Each year, the National Black MBA Association (NBMBAA®) convenes its members, corporate and university partners and some of the world’s most sought-after thought leaders for a week of education, leadership, career opportunities and networking connections at its Annual Conference and Exposition. This year, 8,700 attendees celebrated the organization’s 40th Anniversary Conference in Detroit, September 25-29, by paying tribute to its legacy of excellence while keeping a keen eye focused on its future.

“For those of us who were not around at the first conference, [this year’s conference] has a nostalgic feel because we’re honoring our past. We recognize our legacy leaders who made it possible for us to be here. We are talking with our founders or legacy leaders about what led them to take the risk to do this, and how we have tried to take that base and expand it. What do they think about the organization and where we are today relative to what their thinking was back in 1979,” says Jesse Tyson, president and CEO of NBMBAA®.

Along those lines, the conference paid tribute to the two founding members of the NBMBAA® Conference: Bill Brooks and Barbara Mahone.

During the first conference in 1979, NBMBAA® presented a Cause of It All Award to civll rights pioneer Rosa Parks. In the 40 years since, no one else has received the award. However, as part of the tribute to its past, the organization, this year, presenteded it to Congressman John Lewis (D-GA) for his tireless social justice work.

This year’s conference theme was “One Voice. One Mission,” which inspired attendees to “invest in themselves through conference programming designed to empower and ignite career growth and progression.”

Each year, the NBMBAA® Career Expo features some of the world’s top companies that speak to attendees about career opportunities, conduct interviews and, often, hire attendees on the spot. This year’s conference boasted over 250 leading Fortune 500 companies participating in the Career Expo.

One of the NBMBAA®’s long-time partners, DTE Energy, worked very hard to increase its presence at the conference. In addition to participating in the Career Expo, the company hosted an invitation-only event for potential job candidates at its Detroit headquarters. 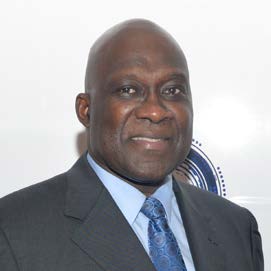 According to DTE Energy Vice President of Human Resources Operations and Chief Diversity & Inclusion Officer Diane Antishin, being a part of the 40th anniversary conference was a “great opportunity to understand the leadership development opportunities that are being provided to conference attendees. It was also a great opportunity for the attendees to get to know the different companies that are present and to understand what type of career options are there. And it was great for us to highlight the career opportunities that we have at DTE for diverse talent.”

Regarding particular areas that DTE Energy is looking to fill and what they look for in hiring talent, Antishin adds,

“Our Strategy and Finance areas are always focused on high-caliber talent and we look to the NBMBAA® as a source for that talent and an opportunity to connect their members with our particular job opportunities. We’re looking for the well-rounded candidate—those who have strong educational credentials, those who have work experience that can contribute here at DTE and those who bring energy and excitement to DTE in their career search.”

Tamira Chapman, an attorney for Ford Motor Company, attended the conference and offered some advice for diverse professionals looking for career opportunities.

“Start watching the trends. Start looking at the different reports that suggest what the jobs of the future are. What are the areas where we’re missing pockets of people?” she says. “[You] have to look at what these places really need and then spend that time getting your package ready. Once the package looks good, they won’t deny you because you’re a certain race or color or woman or whatever. That’s never going to happen. The problem is that we don’t get to be part of the conversation because we aren’t ready.”

NBMBAA® may pay tribute to its past but that doesn’t mean it’s not looking forward to the future, which is evident in its recent appointment of a National Advisory Council of NBMBAA® members and thought leaders across several industries who will serve as senior advisors and provide input on future endeavors.

“Their primary focus is going to be how can they help us shape our future strategy around new programs and new initiatives, that are designed to strengthen the professional development of our members,” Tyson says. “It was designed for us to leverage the expertise that already exists informally within the NBMBAA® family. We thought it was time to bring some formality to it.

According to Donald Cormer, NBMBAA® board chairman, the organization kicked off the Council in November with 20 members who work in government and leadership positions in major corporations. “It’s a great cross-section of individuals, all who have demonstrated good success in their careers and competencies across a myriad of disciplines and industries. And that’s the whole intent, to be able to look and have people to weigh in with a good cross-section of thinking.”

“They all have a common desire to help us create a high profile value proposition for our members, such that we can strengthen the pipeline of individuals going into the corporate world, or individuals who are deciding they want to go into business for themselves,” Tyson adds.